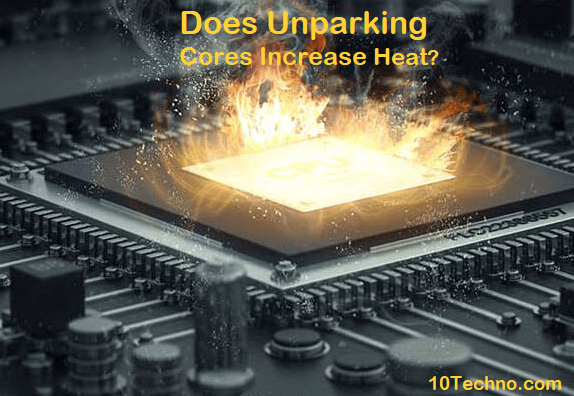 Core parking is a term unfamiliar to everyone. However, core parking is defined as a low-power mode of the computer. The phenomenon of putting a personal computer into sleep mode to conserve energy and reduce the computer’s heat dissipation.

The CPU has been in a low-power sleep state for a long time. Initially, these low-power states commanded the entire CPU to pause execution and sometimes required other components to be powered off, but this was ultimately not very efficient.

The next big step in CPU power-saving features was when multi-core CPUs were developed. Instead of halting execution of the entire processor, these low-power states collectively pause execution on each core, resulting in fairly effective power management.

The core was marked as idle but was still consuming power. The next level of these CPU capabilities is Unparking and Parking Core.

What is CPU Unparking? And what does it do?

A CPU Unpark is a small, lightweight system application that allows Windows PC owners to control aspects of CPU usage by modifying the CPU parking index.

With core parking, the operating system completely shuts down the core so that it no longer functions and consumes very little power.

However, only when the core is needed can the operating system wake it up and speed it up to handle the load on the core.

As mentioned above, multi-core CPUs developed the ability to park cores when they are not needed to reduce power consumption and heat production. Forcing the core to release will make the CPU use more energy and increase the idle temperature.

When to use CPU core parking in Windows 10?

CPU Core Parking in Windows 10 is useful if you have a low-end gaming PC and want your PC or laptop to use 100% of its CPU cores to enable maximum gaming performance to reduce lag. The glitches occur while playing games that require more CPU usage.

According to the most popular gamer forums and communities, it’s a different experience than any other game. Some gamers experienced an increase in fps, and some experienced the same result or decreased fps.

Many gamers have reported that unlocking reacts differently depending on the game and processor.

The Core i3 and Core i5 gen processors can not increase fps, but the core i7 3rg gen increased fps and system performance by 20%.

Yes, it’s safe. Since it is designed to use 4 cores simultaneously, it will not adversely affect the CPU regarding performance improvements.

How to enable or disable CPU parking?

Here you can choose your power plan. Next, you can click “Enable” in “CPU Parking” for “On AC” or “On Battery” to enable and enter the % of the cores you want to activate.

What are the benefits of Unparking CPU cores?

Instead of having cores sleep and wake them up when needed, you can unpark all CPU cores, leaving all CPU cores ready and waiting for tasks to run. The result is better responsiveness and, in most cases, better performance.

What are the downsides of unparking CPU cores?

The two most important downsides to keep in mind are that you should expect higher power consumption and higher temperatures as all CPU cores are working simultaneously.

Core parking negatively impacts performance in most cases. Unparking all cores means you can use all of your processor power without delay, sometimes messing with unparking and parking cores.

Respectful, it’s safe as far as I know. You get better stability in games and on the bench. If you are the owner of an Intel Core I7 and a new multi-core Intel CPU such as Windows 7 or Windows Server 2008 OS, you may have already noticed that some cores in Resource Monitor are marked as parked.

Disabling core parking on your CPU can make your computer benchmark faster. Microsoft chose to give more power to hardware performance, but custom power plan options are left to vendors, server administrators, and superusers.

Is there a way to reduce core parking?

Sometimes, depending on your PC’s performance, you can adjust core parking to reduce the micro-shutter that occurs when gaming or resource-intensive. This new feature in Windows takes care of Core Parking well, but you can tailor it to your needs if you want.

Yes, Windows matters while unparking CPU cores. For older Windows 7 and hardware, you’ll need to unpark the cores because the fps will increase, and you’re more likely to get high performance when old windows aren’t smart enough to unlock the core. And you can experience a huge increase in fps.

Windows 10, on the other side, is an advanced operating system and is smart enough to know which cores are not parked. Frames per second may not increase significantly, but it can help reduce game terminations and lag.

The lag drop happens when Windows unparks the core to fix that problem; manually unparking reduces latency, and you don’t feel any shutter or lag.

Yes, it is. Because many games are not properly optimized and tuned, the parking core that doesn’t need to park negatively interferes with Windows, messing up the parking/unparking process and resulting in low FPS and performance issues.

When should I unpark all CPU cores?

Unparking all CPU cores depends on you. Unpark all CPU cores if you benefit from unparking CPU cores, and power consumption and heat are not an issue. On the other hand, unparking the core may not be a good idea if you’ve already experienced high temperatures at idle.

If you are a laptop user, do not unpark the core while the battery is in use; instead, use the laptop by removing the battery and plugging the power cable directly into a power outlet.

Does the parking core save power?

A parked core draws little or no power, so the answer is yes. The parking core saves power.