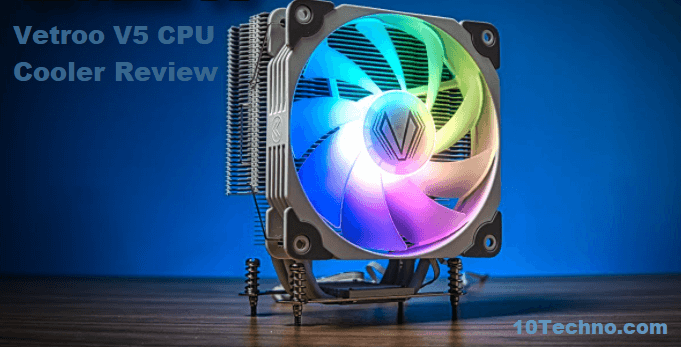 There are many cooling options for your PC, but not all are the best for your budget choice. If are looking for something more affordable than standard CPU cooling solutions, the Vetroo V5 CPU air cooler is exactly what you need.

Adopting a direct contact copper base, not only suitable for CPU but also improves the optimum contact area and thermal conductivity.

The Vetro v5 is one of the best CPU coolers at this price because it combines so many things that people are looking for these days in one cooler. Now let’s begin our Vetroo v5 CPU air cooler review and performance.

The heatsink is a pretty compact base tower. The Vertroo V5 fits easily into the majority of cases on the market as long as it doesn’t wobble in one of the smallest cases.

Alternatively, you can check out other alternatives to CPU coolers that are more reliable and better in performance.

The Vetro V5 is one of the first coolers in this price range to have five 120mm heat pipes in the base. The base isn’t very well finished and you won’t get the ultimate glossy finish with an HDT base, but at the same time, it’s a great value for the money.

These heat pipes go up with a very dense fin array, and that fin array probably has a unique feature for this cooler. This is a stepped rear section where some fins are wider at the top than at the bottom.

The reason is that on Intel systems you can mount this in east-west or north-west orientation, but on AMD’s side you cannot because of the mounting bracket.

The selling point of the v5 CPU air cooler is that it comes with an addressable RGB socket that can be controlled by aura sync or any other 3-pin compatible motherboard or RGB controller.

Quiet fans are excellent for those who want more than a little air. A fan speed of 1700 rpm and an average static pressure envelope provide enough airflow to cool the computer given the speed level.

Quiet fans are excellent for those who want more than a little air. A fan speed of 1700 rpm and an average static pressure envelope provide enough airflow to cool the computer given the speed level.

What’s inside of Vetroo’s package?

The Vetroo cooler is well packaged and protected in a carton box. An open-cell foam layer at the bottom of the box protects the cooling plate, and a layer of foam between the fan and heat sink protects the aluminum fins from damage during shipping.

The installation instructions are very simple as well as a QR code but it’s clear and easy to follow. Installation is pretty straightforward while using the native AMD backplate for the am4 socket.

Is Vetroo a good brand?

Yes, Vetroo is a good seller on the internet. Vetroo has an average rating of 9.3 stars, which means the majority of buyers are satisfied with their purchases.

Vetroo V5 CPU Air Cooler is compatible with the LGA 1200.

The Vetro V5 comes with thermal paste and provides brackets for installation on Intel or AMD motherboards.

How often should I change the thermal paste?

In most cases, you won’t need to reapply more than once every few years, but if you remove the cooler for any reason, you will need to replace the paste.

You may also consider reapplying the thermal paste if the CPU temperature rises.

Overall, the Vetroo v5 comes at an affordable price with white and black colors and has an addressable RGB fan to match any build or theme. If you looking for an under $30 CPU cooler Vetroo V5 should be your first and last choice.