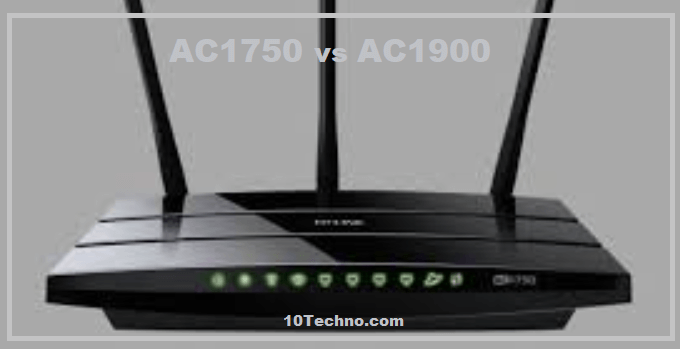 With so many great routers, it’s no surprise that the AC1750 and AC1900 are the most popular router types on the market today. Both offer advanced speed, good reliability, and a solid feature set.

Choosing between the two can be very difficult for some users. Many users don’t fully understand the critical differences between AC1750 and AC1900 routers.

If you’re looking to buy a newer wireless router, you’ll often see the letters AC. Companies usually don’t care to explain what these letters and numbers mean or skim. Let’s start with the AC letter first.

What is the AC number?

AC in the name means that the wireless router supports the latest 802.11ac networking standard.

Almost all modern routers support this. A prime number without the letter N in the name instead of AC indicates that an older networking standard is being used.

Now that you know what AC stands for, what happens to the number after AC? This number represents the theoretical maximum bandwidth owned by the router.

In short, the higher the number listed, the faster the router can go. The number following “AC” in the router name is used to specify the speed capability, but these speeds are split into two or three signals.

Most routers are dual-band. It generates two separate signals, one 5 GHz signal and one 2.4 GHz signal. However, some companies are starting to make tri-band routers.

This tri-band router has the highest total theoretical maximum bandwidth every time you see a number above 3000, and you know you are dealing with a tri-band router.

The extra band helps handle excessive traffic but doesn’t increase the speed available at any given time.

The actual maximum speed that an AC3200 router can produce on a single network is 1,300 Mbps.

The two most popular router options on the market today are the AC1750 router and the AC1900 router. Both dual-band routers provide up to 1,300 Mbps in one 5 GHz band.

The main difference is that the Netgear Nighthawk R7000 provides users with incredible WiFi speeds and solid reliability.

Like the previous Nighthawk R6700, this NETGEAR router is a best-in-class performance device, delivering the fastest speeds.

At close range connected to a 5 GHz signal, we measured an average of 477 Mbps, a slight improvement over the AC1750 model.

This improvement is probably related to Nighthawk’s upgraded antenna. The AC1900 version of the Nighthawk router features a much more robustly built exterior with larger antennas to spread the signal further and a heavier base that gives the router a better overall feel.

However, the most notable improvement was in the 2.4 GHz band. Unlike the AC1900 router, the NETGEAR Nighthawk’s strong WiFi signal remained excellent even when connected to a weaker band.

In addition to the performance upgrades, NETGEAR has added several features, the most important of which is the ability to connect your WiFi system with your Amazon Echo.

Users who own a virtual home assistant device can use voice commands to control network settings.

NETGEAR also adds a VPN feature, allowing you to surf the web safely and anonymously.

The NETGEAR Nighthawk R7000 delivers lightning-fast speeds over large areas while giving you access to tons of convenient features.

This is an excellent option for anyone who wants to get the most out of WiFi at home.

The Netgear AC1750 Launched in 2012, the AC1750 router was a revolution in WiFi systems. Advancing beyond the N network standard, the AC1750 router uses the 802.11ac standard to provide users with much higher speed and reliability.

Perhaps the greatest attribute of the AC 1750 router is its dual-band capability.

The speed held up relatively well until reaching 25-30 feet on the router, which dropped to around 280 Mbps.

We were impressed with the router’s speed and ability to withstand great distances.

Despite their prolonged use, these routers are still widely used today. It’s not the most modern WiFi router on the market today, but it’s still potent and can easily handle the average user’s needs.

One area where the AC1750 lags are that although it utilizes dual-band technology, its second band, 2.4GHz, is not as influential as the AC1900.

Users who plan to connect multiple devices with high requirements to the network simultaneously may experience reduced available speeds.

A key area where the AC1750 router shines is affordability.

With many upgraded versions of these routers today, such as faster AC models and new “mesh” WiFi systems, AC1750 routers are usually very affordable, making them the perfect option for users on a budget.

Overall, this product from NETGEAR offers excellent performance at an affordable price, making it suitable for all budget users who want fast WiFi.

The AC1750 is best for tiny homes with minimal home automation hardware.

It’s more than capable of providing a larger area and a significant number of home automation connections, but it’s not as good as the AC1900 regarding these applications.

If you plan to use the router only for streaming, downloading, and browsing, the AC1750 is enough.

The quality of service features implemented today are very effective at providing a fast and reliable experience that doesn’t crash when you need it most.

You can have a fast and smooth mobile experience using either router. The AC1900’s remote access feature is easier to set up, but so is the parental control feature.

So, if you plan to frequently remotely access your router to make changes or test new settings, the AC1900 might be a better choice.

If you want to set up and forget your router, the AC1750 is a good choice.

If you plan to play many online games or have a large family with extensive home automation features, the AC1900 should be your choice.

The AC1900 has the upper hand in speed and quality of service enhancements, which benefit the game disproportionately.

Likewise, the AC1900 is natively built for home automation and the Internet of Things (IoT). Because of how powerful this router is, you will have a challenging time meeting the connection limits of this router.

Ultimately, the bottom line is that the AC1750 is better for most people, but the AC1900 is a better choice in the long run.

As the AC1900 ages, minor software issues are resolved, and the hardware is better than the AC1750.

The AC1900 transfers faster than the AC1750, making it better for fast transfers of large files.

So, if you plan to transfer vast amounts of data very often, the AC1900 router might be the best fit for you.

Choose the one that fits your needs.

Does Unparking Cores Increase Heat?
Is Intel Pentium Good for Gaming in 2022
Does Intel Core i5 4690 Have Integrated Graphics
How to Start Vlogging with iPhone in 2022?