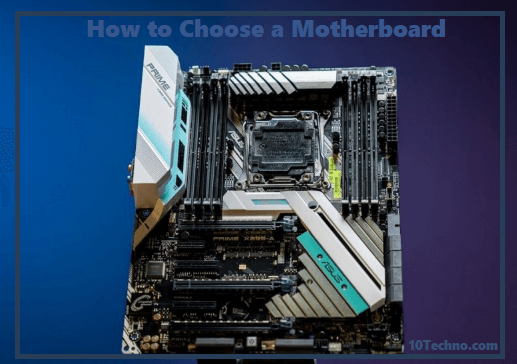 There are several types of motherboards.

Table of Content hide
1 There are several types of motherboards.
2 How to Choose a Satisfactory Motherboard
2.1 Which Motherboard will Work with your CPU?
2.2 What Slots Do you Need on your Motherboard?
2.3 Internal Connector and External Port
2.4 How Many SATA Ports do you Need?
2.5 SSD Technology
2.6 RAM Compatible with your Motherboard
2.7 Motherboard Size, Form Factor, PC Case Size
3 Frequently Asked Questions (FAQs)
3.1 Which is the best Motherboard in 2022?
3.2 What are the Memory Slots on the Motherboard?
3.2.1 What did Motherboards Look like in the 1990s?
3.2.2 What is the Main Circuit Board of a Computer?
3.2.2.1 Related posts: 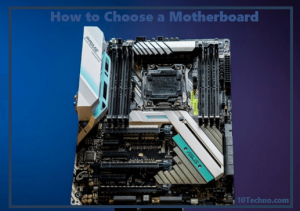 For Building a new computer, you need to know how to choose a perfect motherboard according to your needs. The Motherboard is the basis for adding other components such as CPU, GPU, RAM, and SSD. But how do you choose a good motherboard in 2022? What should I pay close attention to?

How to Choose a Satisfactory Motherboard

The first factor that you should consider is the price. The Motherboard is the most expensive component of a computer. Therefore, it is essential to choose an affordable motherboard. Don’t buy a motherboard that costs more than you can afford. You can find many good motherboards at very affordable prices.

There are many factors to consider when choosing a motherboard for building a PC. By reading this, you will know what those factors are and how to choose a motherboard.

Which Motherboard will Work with your CPU?

First of all, you need to choose a CPU you want, and when you buy a motherboard based on that. You will find the term “platform” used to describe sockets.

The essential sockets are AMD AM4 and Intel LGA 1200. However, you probably already know that Threadripper and Xeon processors are meant for workstation computers because of their high core and thread count.

After all, it doesn’t matter what the CPU is, as long as you know what a socket is.

What Slots Do you Need on your Motherboard?

There are various slots on the Motherboard; for example, CPU and RAM slots can accommodate CPU and RAM. Most motherboards have 1 or 2 CPU slots and 2-8 DIMM slots for RAM.

There are also several other PCI slots used for other expansion units. Most importantly, the PCIe x16 slot you will use for your graphics card.

Almost all motherboards today have at least one PCIe x16 slot and a few other PCI slots for network cards, modems, tuners, sound cards, etc.

Remember, there is a difference between PCI and PCIe (“e” stands for express). PCIe slots are used for graphics cards because of their higher transfer rates.

There are also SATA slots used for storage devices such as SSDs and HDDs. By default, all motherboards have a few SATA slots. Most motherboards today have 6 SATA slots, but the number varies.

Speaking of storage, a critical slot to note is the M.2 slot. Used for high-speed NVMe SSDs and regular SSDs. Not all motherboards have M.2 slots, and high-end motherboards usually have more than one.

And when it comes to power, the PSU has a few other cables that need to be connected to the internal connectors on the Motherboard.

The 24-pin power for the board and the 8-pin power connector for the CPU are the most important and must be connected.

It’s not a big deal for most people regarding external ports. Looking at the rear I/O, you can see what kind of port it has. When buying a motherboard, look for the latest standards like USB 3.2 and USB Type-C.

Because these ports are not now but will be relevant in the future, you can connect more USB devices using the internal USB connector if needed.

It’s also worth mentioning, in particular, that the number of case fans connected to the Motherboard is essential for cooling.

Almost all motherboards have at least one CPU fan connector and one case fan connector. A large number of 3-pin or 4-pin fan headers are required to connect 3 or 4 case fans to the Motherboard.

However, if you like the Motherboard and have all the features you want but don’t have enough fan headers, you can use a 4-pin Molex fan adapter cable to connect the case fan directly to the PSU.

Also, if you’re interested in RGB, you’ll need to buy a motherboard with RGB headers. Almost all new motherboards have one or two RGB headers, so it’s not hard to find.

How Many SATA Ports do you Need?

If you’re unsure how many SATA ports you need, ask yourself: “How many HDDs and SSDs are you planning to get?”. You are not alone if your answer is one SSD and one HDD. Most people don’t use more than 2 SATA ports, especially if they have an M.2 slot for an NVMe SSD.

Still, if you’re planning on getting more storage, it’s good to know that almost all motherboards come with at least six SATA slots.

High-end motherboards, like those used with AMD Threadripper CPUs, often have six or more SATA ports, but you probably won’t need that much storage in the first place.

SSDs are great because they are much faster than traditional HDDs. You will feel the difference between the old HDD and the new SSD.

But did you know there is a vast difference between NVMe M.2 SSDs and SATA SSDs? Like. NVMe SSDs are about five times faster than SATA SSDs, so you can’t use traditional SATA ports.

However, not all M.2 SSDs are NVMe as traditional SSDs can use M.2. And there are PCIe NVMe SSDs. These are arguably faster than NVMe SSDs attached to M.2.

However, the difference between the two is unimportant to most people. So, how do you choose a motherboard? Simplicity – look for a motherboard with at least one M.2 slot that you can use now, if not later.

RAM Compatible with your Motherboard

Another important topic when choosing a motherboard is RAM. RAM fits into dual inline memory module (DIMM) slots. The more DIMM slots your Motherboard has, the more RAM you can install.

The channel type is also worth mentioning. All new motherboards support at least dual-channel memory, but there are also triple-channel and quad-channel ones.

There are some declining returns, so don’t worry too much. Because of the vast performance difference, dual-channel requires that the same RAM sticks be placed in the same colored DIMM slots.

When choosing a motherboard, it is essential to ensure that the RAM works well with the Motherboard. Check your Motherboard’s memory compatibility list to ensure your RAM and Motherboard are compatible.

How Much RAM Do I Need for Gaming?

The motherboard form factor is another crucial factor to pay close attention to when choosing a motherboard. In general, the bigger the Motherboard, the more features it has.

It also means that it is more expensive. A small Mini-ITX motherboard, on the other hand, would fit in a small case that fits under the TV.

You can easily fit two or three graphics cards into an ATX build, but the question is whether you really should.

Furthermore, Watch some of the best tips ever explain in the video given below

Which is the best Motherboard in 2022?

What should I look for when I buy a motherboard?

When you’re buying a motherboard, look for a socket type. Look for a motherboard that has plenty of RAM slots. You also want to ensure that the Motherboard is compatible with your installed processors.

How do I know what Motherboard I need?

What is a CPU?

A CPU is the central processing unit. A motherboard has a CPU.

What is a graphics card?

What is a RAM slot?

A RAM slot is where you put RAM. A motherboard may have many RAM slots.

What is a socket type?

A socket type is the type of processor you have. A motherboard has a socket type.

What are the Memory Slots on the Motherboard?

You can insert computer memory (RAM) into your computer through a memory slot, memory socket, or RAM slot. Most motherboards have two to four memory slots that determine the type of RAM used in your computer.

The most common types of RAM are SDRAM and DDR for desktop computers and SODIMM for laptop computers, each of different types and speeds.

The figure below is an example of the memory slots inside a desktop computer.

By the late 1990s, many personal computer motherboards had consumer-grade embedded audio, video, storage, and networking features that required no expansion cards. Advanced 3D gaming and computer graphics systems typically kept only the graphics card as a separate component.

What is the Main Circuit Board of a Computer?